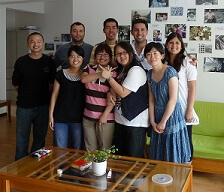 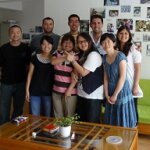 Many of you have served with CWEF through one of our short-term service learning trips. A majority of CWEF’s volunteers share their talents with us through those special programs on location in one of our partner communities. CWEF also has special needs as an organization related to our communication and    administration functions. We are blessed that volunteers also share their unique gifts with us in those areas. Some times these volunteers are already familiar with us through participation in our short-term events. But, volunteers also learn about CWEF and our mission through the internet. Last summer we were blessed to have four volunteers serve with us for one month. All four were students finishing their MBA program through the highly regarded Vlerick Leuven Gent Management School. This MBA program integrates a “Giving Back” program as part of its corporate social  responsibility coursework. All  students in the program seek out a non-profit agency through which they can complete a project relevant to their interests. These four students spent a month in our Kunming office. They reviewed our current processes and made recommendations for improving CWEF project information tracking. In addition, they reviewed available information management systems and made recommendations to us for systems that would meet our needs as well as be accessible  across our various offices. The tracking improvements were instituted already in the fall and the  information management improvements are being implemented throughout this year. Keep an eye out this month for our new website that is a part of these improvements. Thank you to Milena Loayza, Julian Sanchez, Miguel Ortega and Carlos Forey for their contribution to CWEF’s mission to improve lives through education and service.

September 30th marked the official closing of the CWEF Sichuan field offices located both in Chengdu and Nanba which opened in 2008 in response to the May 12, 2008 earthquake. The disastrous 8.0 earthquake took the lives of over 68,000 people, leaving hundreds of thousands homeless.

The then manager of the CWEF Guangdong office, Toni Wang, who is originally from Chengdu was instrumental in helping CWEF make connections with the government and school officials in the small countryside town of Nanba. CWEF was also able to partner with the Anthropology department at Zhongshan University in Guangzhou for the purpose of facilitating a counseling program and research efforts specific to the effects of earthquake victims in the small town of Nanba.

During the past three years CWEF, along with the Pingwu county government and school officials, were able to accomplish many projects in an effort to help the schools and communities recover from the earthquake. These projects included building three water systems in three separate areas, providing many school resource materials for over 15 different schools, including two complete libraries with book shelves and over 250,000 books, a computer lab, closed circuit TV for educational purposes, and basic materials for teaching biology, chemistry and geography.

During this time there were also four different service teams that came and held English camps for both students and teachers and two service teams that came and provided eyeglass clinics that covered over 15 different villages and schools. In order to accomplish all of these projects, CWEF was privileged to have on staff Charlotte Chen and Bryan Chen (unrelated) who served faithful for nearly three years. CWEF Sichuan would also like to thank the many generous donors who made these projects possible.

From September 23-29, the #3 Middle School Affiliated with East China Normal University (or ECNU #3) welcomed seventeen students and three teachers from Concordia International School Shanghai (CISS) to their campus in Shanghai’s southwestern Jinshan district. ECNU #3 middle school is made up entirely of migrant workers’ children. Migrant families move to Shanghai from more rural parts of China because the job opportunities are better. When they arrive in the big city, though, they encounter many struggles from finding stable work to providing quality health care and education for their children. In Shanghai, there are an estimated 9 million migrant workers out of a total population of 23 million.

The CISS students came to Jinshan to support the migrant students’ education by serving as volunteer English teachers as a part of their school’s annual Interim program. The ECNU #3 students enjoyed a week of learning English in new and exciting ways, using a variety of different subjects, such as Art, Music, Math, Science, and Sports.

The CISS group worked hard, teaching 6 classes of energetic 6th and 7th graders every day from Monday through Thursday, as well as 3 classes on Saturday morning. On Saturday afternoon, the teams separated into smaller groups and were welcomed to visit the humble home of four of the ECNU#3 students.

At the end of the week, the group from CISS realized that they had learned more than they had taught. Neil Whitehead, a math teacher at CISS and one of the adult leaders for the trip, said this about the experience:

There were six home visit groups in total, which had 4-5 members in each who volunteered their time, car and money which paid for fuel and food. Three of the volunteers were CWEF university scholarship recipients who graduated from Xiangshan high school with 3-year high school scholarship support from CWEF. Now they are willing to volunteer their time and energy to help students who have similar circumstances.

Each group had 4-6 applicant families to visit depending on distance. It was a full and meaningful day for each volunteer.

Huang Jinfeng is one of the Xiangshan high school scholarship applicants. In 2008 Jinfeng’s family had to borrow ¥20,000 (US$3,170) from relatives to pay off debt after her father passed away from illness. The family has 3 children in school. Jinfeng’s 45 year old mother is growing one mu (0.16 acre) rice and also works part time in the village. The annual income of this family is around ¥4,800 (US$760). During our home visit we learned that Jinfeng’s younger sister graduated from middle school this July. To save money, her mother sent her to vocational high school which has a much lower tuition of ¥500 (US$80) per year. “I could not support two kids to high school. Jinfeng’s is a better student, so I let her go to high school,” Jinfeng’s mother said. Even though life is not easy for this mother, she still has hope for the future. She hopes Jinfeng can go to university after graduating from high school. At the end of the day each group took time to talk and write down the overall impression of the family.

Home visits help us to understand the applicants’ family situation, build relationships with the families and choose qualified students. Bringing news and hope to the families while gathering applicant information to share with donors is fulfilling. We want the families to know that there are people and organizations that care about them and want to help. The three university volunteers encouraged the applicants and their parents to continue high school study. They have set a good example for finishing high school and continuing on to university.

Through the customizable CWEF service learning program, teams can learn about the history and culture of a place as they serve with CWEF. In June, a group of American high school students and Hong Kong International School alumni joined in a 12-day service learning program in Cambodia. During the visit, the team spent time in Siem Reap, Phnom Penh, Sihanoukville as well as Kampong Thom and Kampong Chhnang provinces.

The team had a historical and cultural orientation of Cambodia before serving with the students of Child Rescue Organization in Kampong Chhnang and Stronghold Cambodia in Sihanoukville.

The historical orientation included visits to ancient and modern historical sites. The team spent one day touring the temples of Angkor Wat and visits to the Angkor National Museum, the National Museum of Cambodia and Wat Phnom. After learning about the Cambodia at its peak, the students learned more about the dark times of modern Cambodian history. Through visits to the Landmine Museum in Siem Reap and the Toul Sleng and Cheoung Ek in Phnom Penh, the team gained a better understanding of the magnitude of the war and genocide during the Khmer Rouge era.

To encourage a well-rounded understanding of current Cambodian culture the team also had the chance to have some cultural experiences. The first major cultural experience was Phare, the Cambodian circus in Siem Reap. The story was one person’s struggle through the Khmer Rouge era and journey of healing through acrobatic and artistic expression.

In Phnom Penh, the team also had the opportunity to visit an art academy where they learned more about traditional Cambodian dances before watching a professional traditional dance performance.

The team also spent one day in Kampong Thom province as they traveled between Siem Reap and Phnom Penh to learn more about social enterprises and business as mission at Khmer Homestay. The team visited a fair-trade workshop, made traditional Khmer rice noodles and learned more about the impact of social enterprises on the employees and community.

After historical and cultural orientation was complete, the team spent six days serving at Child Rescue Organization (CRO) in Kampong Chhnang and Stronghold Cambodia in Sihanoukville. The team sponsored the high school students from CRO to join them at Stronghold Cambodia where the CRO students led most of the activities where they were able to strengthen their leadership skills.