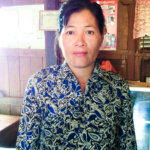 When Ros Sineng’s husband died, she felt that she was left helpless and dependent on others. Life was suddenly such a struggle. Sineng had to raise her five children by herself, but she was determined to never give up on them. Sineng began to raise pigs as a survival source of income for her family. She also found work as a clerk at the commune council office in her village in Taben, Cambodia. Sineng was very excited to hear about CWEF’s Animal Gift program in Taben and was looking forward to her turn.

In January 2014, Sineng was selected to be part of the third cycle of the animal gift program in Taben because she was a widow who wanted to make a positive change for her family. Through trial and error over the years, she has learned to raise pigs, but had yet to receive quality training like the one offered to her by CWEF’s local volunteer, a trained veterinarian. She was very excited to take part in the training.

Six months later, when CWEF conducted a follow-up training and 6-month review of the program, Sineng was the champion of her group. She had earned an additional $325, almost double the value of the two piglets she received at the start of the program. Sineng told us that the program has completely changed her life and her family. She is more capable to support her children with good food, health care and education.

Most importantly, it has helped her build confidence. After she sold the first two pigs she received from the program, Sineng decided to buy four more pigs to continue her business. She had never raised that many pigs before. Yet, with the knowledge and skills received from the training and experience, Sineng has more confidence and commitment to expand her business. “I want to raise 4 pigs, and then 6 pigs, and then 10 pigs. I want to run a pig farm. That’s my goal,” said Sineng.