“Being able to watch the offspring of my chicken growing and wandering about the house day by day with my family once again is one of the happiest moments of my life”, said Mr. Heng.

Mr. Heng and his wife are both primary school teachers, but when the family faced economic challenges, their oldest son had to drop out of school to go to work. In 2014, Mr. Heng heard about CWEF Animal Gift program through Pastor Pheng Seng from Bot Semuan Church.

Pastor Pheng Seng understood that the program aimed to reach out to widows and vulnerable woman so he was not sure if he could offer the Heng family this opportunity or not. After a discussion and consideration of the situation with the CWEF staff, Pastor Pheng Seng decided to allow the Heng family to join the Animal Gift Program. In May 2014, Mr. Heng and his wife attended the animal gift training organized by CWEF. 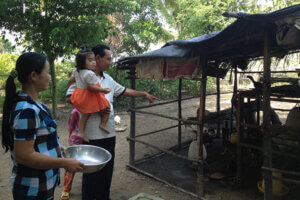 During the interview one year later, Mr. Heng told CWEF staff the seven chickens that he received made a great impact on his family. Within the second cycle, Mr. Heng sold his chicken and the offspring five times. Not only was Mr. Heng able to return the animal gift received in cash of $150 back to CWEF, the Heng family economic situation has stabilized, and Mr. Heng is able to provide better food and education for his children.

“As a family breadwinner, there is no greater joy than being able to provide regular meals to your family”, said Mr. Heng. He believes that if the chicken investment keeps growing, the rest of his children will not have to quit school because of economic crisis.