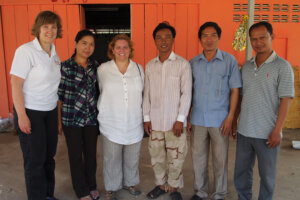 On April 30, 2016, CWEF staff traveled to Samdan District to meet with Pastor Chanbol and six others who were interested in being a founding member of the Animal Gift Committee. The CWEF staff and committee members discussed the goals, mandates, roles and responsibilities of the committee and most importantly, how to have a successful and transparent handover of the animal gift program from CWEF to the Animal Gift Committee.

The CWEF staff and committee members delayed the fifth cycle of gifts due to the unsuitable hot weather for raising animals. The fifth cycle is scheduled to begin in mid-June and the newly formed animal gift committee will begin the selection process for ten new recipients and two additional pastors to be part of the program.

The CWEF Animal Gift Program in Samdan District began in 2011. The vision of the program is to reach widows and impoverished families at all 11 churches in the district to improve their economic capacity. After the first four cycles, the program has been a success and all of the recipients were able to repay the animal gift loans and even make a profit. All of the fourth cycle recipients reported they were able to sell their pigs twice during the cycle. Ms. Tok Bo shared that she was able to make a net profit of $95, which she used to buy a solar panel for her home.