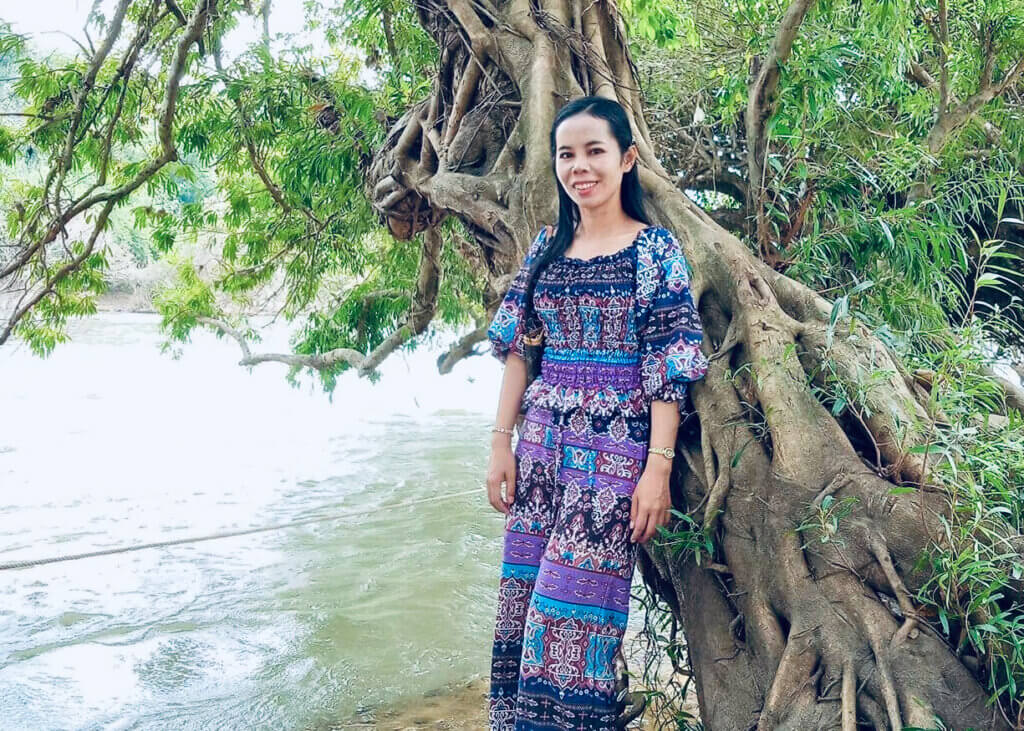 Her name is Sreymom; she is Cambodian. She grew up in a village as the oldest of five children. Sadly, when she was just twelve years old her mother died. Then helping her father earn an income for the family became her responsibility too, and after she completed sixth grade, her father asked her to begin full-time factory work.

Sreymom describes, “In my village, mostly at the age of 12–13 years old, (the young people) will (lie about) their age in order to work in a factory. They don’t want to study but want to work in a factory where they can earn money and become beautiful. However, I didn’t want to work there. I wanted to study even though I didn’t know what it will become. I still wanted to study. ”

At twelve years old, Sreymom was underweight. When factory managers saw her small size, they refused to hire her. Not a single factory accepted her. However, every other one of Sreymom’s friends, who were of normal height and weight, received job offers and began working full-time in factories just like they had dreamed of.

After all the factory rejections, Sreymom’s father sat back and considered what to do. If not in a factory, where else could he find work for Sreymom? Soon he found a skills training center in Kompong Chnang province for women who had dropped out of school. The center taught marketable skills like sewing and cooking.

Sreymom really did not want to go to the training center. She wanted to continue her formal education. But she could not speak up or refuse her father. So in the end, she left home and began the multiple day journey to her new life at the skills training center. On the way, she stopped to lodge a single night with one of her relatives. The relative worked as a cook at a Christian orphanage called the Child Rescue Organization (CRO). This ‘chance’ visit would change Sreymom’s life forever.

While she was visiting, the CRO manager also met Sreymom and found out about where she was headed and why. In that one evening, the director ended up inviting Sreymom to live at CRO instead and pursue her studies there. After some initial surprise and discussion, Sreymom eventually agreed.

But the decision didn’t come without cost. When Sreymom’s father found out about the sudden change in plans, he became upset; and for the whole first year, he couldn’t support it.  He very much wanted Sreymom to give up her formal education so that she could earn money. But finally, the CRO director was able to talk with her father and explain the benefits of Sreymom furthering her education, and Sreymom’s father eventually agreed.

The Love and Care of Strangers

When Sreymom first heard of God at CRO, she was incredulous. She firmly committed herself to not believing in him. However, day by day, God used the people at the center to give Sreymom some of the love and care that she had never experienced before.

She confesses, “No one forced me to believe in God at all, but their kindness and love from people that I have met…they treated me like family. And that made me open my mind unnexpectedly.”

Through CRO, Sreymom eventually successfully completed middle school and also high school. But then, she faced a new problem: she could not afford college.

At this time, Concordia Welfare & Education Foundation (CWEF) was introduced to Sreymom and took up her case. CWEF fundraised through generous people like you to provide Sreymom with the necessary funds and an opportunity to fulfill her college dream.

And then, thanks to her own determination as well as a scholarship provided through the kindness of people like you, a well-known university in Phnom Penh admitted Sreymom as an English major!

At university, Sreymom faced many other battles including the fact that mastering the English language was incredibly challenging. At one point, she almost wanted to drop out of college altogether. But…her now personal faith in God kept her strong. Throughout this season of Sreymom’s life, CWEF staff continued to surround her with encouragement and a loving community.

And in the end, she made it! Not only through middle school but through college. She achieved the dream that at one point looked impossible. After successfully graduating from college, Sreymom received job offers with good salaries from schools in Phnom Penh. But she turned down every single offer. Her desire wasn’t to make a lot of money. Instead, she desired to give back to the people that gave so much to her. Now she is working full-time at the Child Rescue Organization that she used to live at providing English lessons to more than one hundred Cambodian students for free.

“There are many kids who need my help to provide them with knowledge, and this is the best way that I could contribute back to my community.”

Sreymom is grateful to Concordia Welfare & Education Foundation and all those who helped her on her journey! Now she can use her knowledge and story to inspire the next generation of students to not drop out of school but pursue their dreams instead.

It’s extremely exciting to see how everything Sreymom has learned, spiritually and educationally, is already spilling over and building up the next generation!

Thank you for helping to break the cycle of poverty for young people like Sreymom through your generous giving and support of Concordia Welfare & Education Foundation.

Become part of the CWEF community and transform the lives of more outstanding young people by donating here.