At its May 22 Board of Councillors meeting, Concordia Welfare & Education Foundation unanimously appointed Joshua Lange as its Executive Director. Since 2010, Josh has served CWEF in various roles as Shanghai Service Coordinator, Operations Director, and most recently as Interim Executive Director.

Josh hails from the state of Missouri in the U.S. and holds a marketing degree from the University of Missouri, Columbia. In 2016, he earned a master’s degree in Global Leadership from Azusa Pacific University. Prior to his service with CWEF, Josh worked for a marketing agency in St. Louis and served for two years as Communication Specialist for the Asia regional office of LCMS International.

“Having known and worked with Josh for more than a decade, I cannot imagine a more gifted, passionate, selfless servant-leader for CWEF at this point in time.  Josh brings a wealth of experience to the role of Executive Director and has been prepared by God to lead CWEF forward in the opportunities God is providing us to share the love of Jesus Christ.  What a joy it will be to work in partnership with Josh!” shared CWEF Board Chair Doug Werth.

In 2013, Josh married Yang Wei (“Coco”). Coco is a graduate of Nanjing University and earned a master’s degree in international business from Birmingham University in England. They are parents to three-year-old John, and newborn daughter Sophia. The Lange family is based in Shanghai and are active members of their church, where Coco uses her musical talents and Josh teaches Sunday School.

Of his new role as Executive Director, Josh shared “It is my continued joy and privilege to serve and learn together with our team, partners, project participants and supporters as executive director for CWEF. God has given us wonderful opportunities to reach out to students and families in Asia with the love of Christ, and we intend to keep working hard to find ever deeper and more effective ways to work with and for them.” 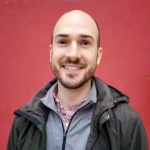